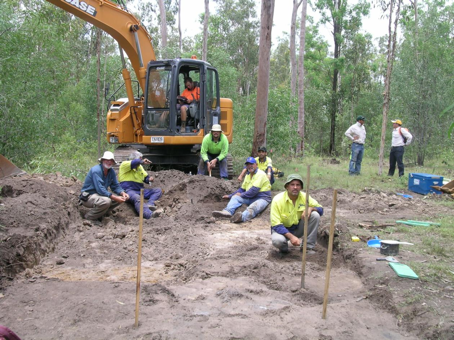 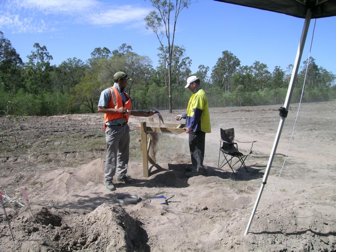 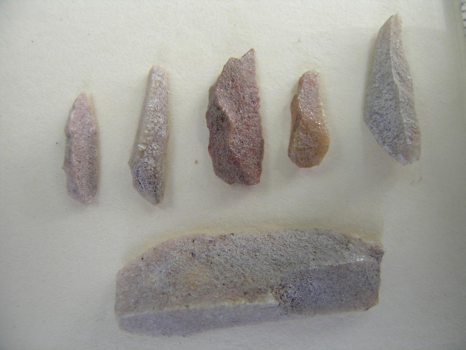 Some of the rare backed artefacts recovered from a square metre of excavation.

The area is within the Jagera Peoples #2 claim area. In 2006 MTAA asked Jagera Daran Pty Ltd, the cultural heritage body that undertakes all aspects of cultural heritage for the combined Jagera, Yuggera and Ugarapul Peoples, to identify potential constraints within part of the study area. The study was a voluntary cultural heritage assessment not linked to any formal environmental planning requirements.

The fieldwork component assists Jagera Daran in the initial identification of cultural heritage within the project area that may requires mitigation and management strategies, and meets the Duty of Care for development required under the Aboriginal Cultural Heritage Act 2003 (ACHA). This Act guides and controls cultural heritage in Queensland and conformation to its various laws is a requirement for all major developments.

The Flagstone Creek Estate property was divided into several parcels of land, called Vegetation Clearing Areas (VCAs) with numeric-alphabetic designations (VCA 1-9). VCA 7, one of the largest areas, was further sub-divided into 7A, 7B, 7C and 7D at the time of the survey, although subsequently amalgamated into one single VCA. For the purposes of this report, however, the original boundaries have been retained to avoid confusion in site identification. VCA 6 was later divided into 6A and 6B. The divisions are largely imposed by creek lines which form broad vegetation buffers between each parcel.

Jagera Daran surveyed VCA 1, 2 and 3 in 2008 and identified a range of cultural heritage sites, with large numbers of stone artefacts.

In November 2008, MTAA requested Jagera Daran Pty Ltd to undertake a cultural heritage survey and assessment of nine further parcels of land (VCA 4-9). Another parcel, VCA 6b, was added in October 2009.

The brief required Jagera Daran to first survey a narrow area along proposed clearing boundaries for security fencing, and then undertake transects through the different VCAs to ascertain whether there might be any cultural heritage constraints. MTAA allotted three months for this survey.

Jagera Daran engaged Turnstone Archaeology Pty Ltd, a small archaeological consultancy based at Sandstone Point, near Bribie Island, to provide technical advice and assistance to Jagera Daran and training for its field representatives. This included training regimes, recording and documentation, and mapping, and training in excavation techniques. Its principal archaeologist, Michael Strong (M.A. Archaeology, University of Leicester), has been working in southeast Queensland for more than 15 years. Turnstone‘s role included construction of a predictive model based on environmental and ethno-historical sources to inform the fieldwork program. Turnstone also supervised any scientific programs conducted, such as excavations and test pitting, spatial mapping and reporting.

Jagera Daran Pty Ltd was represented by its Cultural Heritage Project Manager, James Bonner, assisted by numerous field officers and elders. Over the course of the fieldwork, several volunteer archaeologists also were involved in the project.

Surveys commenced in November 2008. By January, it had become obvious that the dense regrowth over much of the property was hindering an understanding of potential cultural heritage. Numerous sites had been located had been located and several hundred artefacts collected. One of the concerns for MTAA in the lengthy cultural heritage program was the need to continue clearing broad scale areas within the cleared fence lines. The clearing regimes were being affected by bad weather and the time taken to recover surface artefacts from VCA 4-7.

Turnstone Archaeology proposed undertaking, in conjunction with monitoring and further surveying, excavation of a series of test pits to determine whether there was also potential sub-surface cultural heritage constraints and issues. Test pitting is a proven archaeological strategy to understand potential sub-surface constraints (Archaeo 2002a, 2005; Burke & Smith 2004; Strong 2006, 2008a). Jagera Daran negotiated an agreement for a controlled program of clearing to begin, in return for additional field days to which MTAA agreed. Eventually 32 test pits were excavated in a carefully-controlled program designed to maximize archaeological knowledge of the development and to determine potential constraints for future development and infrastructure, such as roads, sewerage, shops and houses.

The test pits produced literally thousands of cultural heritage artefacts. From one test pit alone, an astonishing 1146 stone tools were recovered. This wealth of information and associated data collection slowed the cultural heritage assessment and meant that some areas have not been yet fully assessed through a program of test pitting that will determine future constraints. In particular, VCA 6A & B and VCA 9 have had no program of test pitting.

When the cultural heritage program came to a halt in October 2009, some 147 surface sites had been identified, a total of 32 test pits excavated and more than 6800 stone artefacts had been recovered under controlled scientific conditions in one of the biggest archaeological and cultural heritage salvage programs in Queensland.

MTAA should rightly be acknowledged for their support of the program. No one, apart from Jagera Daran, expected to encounter such a remarkable wealth of cultural evidence in an area that had been logged, cleared and farmed for generations. The test pitting program raises considerable issues about the efficacy of current archaeological practice in protecting subsurface cultural heritage. While there are major constraints still to be mitigated and managed within the development, the project has produced some spectacular results, in terms of the information it can provide on Aboriginal occupation of the Flagstone Creek region.